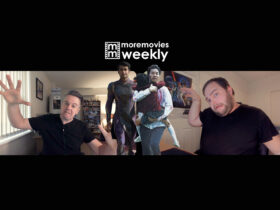 Rope (1948) is a classic psychological crime thriller, directed by the great Alfred Hitchcock, the second of Hitchcock’s “limited setting” films.

The film starts with two brilliant young art students Brandon and Phillip, played by John Dall and Farley Granger. They are in their Manhattan penthouse apartment, strangling to death their former classmate David, who they knew at Harvard University.

They espouse that they are committing the crime as an intellectual exercise: they want to prove their superiority by executing the “perfect murder”.

After hiding the body in a large antique wooden chest, Brandon and Phillip host a dinner party at the apartment with the guests unaware of what has happened. They include the victim’s father, Mr Kentley and his aunt. Also present are David’s fiancée, Janet Walker and her former lover, Kenneth, who was once David’s close friend.

Brandon uses the chest containing the body as a buffet table for the food at the party, which concerns Phillip, who finds the idea macabre. Phillip is the most uneasy with the whole idea and is constantly worried, whereas Brandon is far more calm and excited about the evil scheme, displaying A-typical sociopathic tendencies.

Brandon and Phillip’s idea for the murder was inspired years earlier by conversations with their prep-school housemaster, publisher Rupert Cadell, played by James Stewart. While they were at school, Rupert had discussed with them the intellectual concepts of Nietzsche’s Übermensch, and De Quincey’s “Art of Murder”, as a means of showing one’s superiority over others. He, too, is among the guests at the party since Brandon, in particular, thinks that he would approve of their “work of art.”

Brandon’s subtle hints about David’s absence indirectly lead to a discussion on the “art of murder” amongst the party guests, who grow more uneasy and suspicious throughout the night as the conversation continues.

The film is one of Hitchcock’s most interesting and experimental, especially as it was made in 1948, as a major Hollywood film with big box-office names.

Based on the 1929 play of the same name by Patrick Hamilton, Hitchcock wanted the film to be one continuous take, much like a performance on stage. However, technical limitations of the time prevented this, with the camera’s film capacity being ten minutes. So Hitchcock did a series on continuous takes, ending each scene with something blocking the frame, like panning into someone’s back or a piece of furniture, giving the illusion of one unbroken take.

Rope also plays out in real-time (or close to). There’s a whole array of crew members moving props and walls around, with well-rehearsed actors hitting specific marks on time to create the constant and incredible camera movement. There’s even a beautiful cyclorama in the background for the apartment’s window, at the time, the largest backing ever used on a soundstage. It included models of the Empire State and Chrysler buildings. Numerous chimneys, smoke, lights come on in buildings, neon signs light up, and the sunset slowly unfolds as the movie progresses.

The technique of “one-shot” films has been a curiosity to filmmakers and movie watchers alike for many years. The most remarkable film in the genre is Russian Ark (2003), a movie with 2000 actors and extras performing in one 96-minute take. Of course, the most famous films are more recent, Birdman (2014) with Michael Keaton and Sam Mendes’s masterpiece 1917 (2020), the stunning WW1 movie that won Best Cinematography at the 2020 Academy Awards.

These films all owe a debt to Rope, perhaps the first film to experiment with these techniques and do it under such severe technical limitations, which in my opinion, is a remarkable feat. It’s not just a gimmick. The purpose is to put you in the room with the characters and see the whole story unfold in front of you like a guest at this dark and sinister dinner party.

Rope is also a film that breaks traditions and ideas. We start the movie with a murder and see who the murderers are, which was the kind of reveal that would usually be saved until the movie’s end. Hitchcock would recycle this idea later with Psycho (1960), much like the idea of single location premise being re-used later in Rear Window (1954). We spend the whole film on tenterhooks knowing what has happened but wondering if and when the heinous act will be revealed. The tension is palpable, of course, Hitchcock is renowned as the master of suspense. A technique he would consistently develop and perfect throughout his long career.

It also discusses and analyses the controversial philosopher Frederick Nietzsche, not long after the end of the Second World War, where of course, the Nazis deliberately hijacked his ideas to promote their cause. The film also looks at the idea of murder as an artform, intellectual homicide, the separation of class structures and a critique of a callous society. Amazingly, the film is loosely based on the true story of Leopold and Loeb, two wealthy Chicago students in the 1920s who committed a similar crime.

Rope is a narrative tour de force with a powerful ensemble cast, with John Dall and Farley Granger playing the scheming couple fantastically. It has a suppressed homoerotic subtext that is dangerously delightful for the year 1948. Moreover, it is a darkly satisfying crime thriller from the master filmmaker himself. It is thoroughly revolutionary and hinted at some ideas that Hitchcock would continue to develop with great success in the years to come.

Well, that’s our review of Rope!

Did you enjoy Rope? Let us know in the comments!