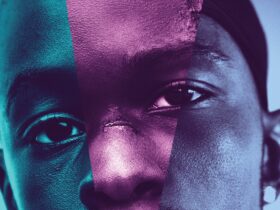 Belfast is the story of a young family of Ulster Protestants living in the city during the beginnings of the troubles in 1969. Told through the eyes of nine-year-old Buddy, the youngest member of the family, the story begins as tensions within Northern Ireland increase and begin to spread into violent outbursts incited by both sides of a divided community.

One night, local loyalists attack the homes and businesses of Catholics living peacefully alongside their protestant neighbours. During what became known as the August Riots, Buddy’s street is targeted with Molotov cocktails, and the ringleaders demand that the Catholics living within the area should move out immediately. This results in a barricade being erected at the end of the street and ushers in a dark chapter in the history of this tumultuous community.

Buddy lives with his Ma and older brother Will, and his Pa works over the Irish sea in England, returning as often as he can. As the troubles within Belfast increase and begin to impact the family, Ma and Pa discuss emigrating to Australia or Canada in order to escape the violence and pursue opportunities that will provide a better life for the two young boys. Unsure about moving away so far and leaving behind their older relatives Granny and Pops, Buddy’s world becomes increasingly more complicated and confusing as tensions within and outside of the family home escalate.

Kenneth Branagh has said that Belfast is his most personal work to date. Being largely autobiographical and based on his own experiences as a youth growing up in Belfast, this moving drama explores the family dynamic and the struggles that occur between parents, neighbours and strangers alike.

“It’s been a place that calls to me all the time, even though really after the first few years of my career I don’t think the larger world had any sense that I was even from there. When I went back in 2011 I still felt as though there was a sort of identity crisis that was unresolved. Ireland and the Irish define so much of themselves in relation to home – it needs to be settled in some way. And I think making this film is a chance for me to go home in a sort of more honest way.”

Kenneth Branagh in an interview with NME

Telling the story from a child’s point of view is a very clever way of dealing with an extremely complicated and sensitive subject. A lot of the details of the troubles are conflated into a more simplistic way of viewing the world, which helps to remind the audience of the numerous ways in which we are all so similar and have a great deal in common, as opposed to getting bogged down in a litany of grievances and disparities that only serve to drive a wedge between us.

As one might expect, the performances are of a very high standard. Balfe and Dornan carry the weight of the drama and portray a young couple desperate for a peaceful upbringing for their children and a solution to their debts. Dench and Hinds provide wise and worldly support, which gives the family a sense of moral decency and a foundation of tolerance and kindness. However, the performance of young Jude Hill as Buddy gives Belfast a wide-eyed and spectacular heart. His chemistry with his grandparents, in particular, is highly believable and moving, evoking a genuine sense of closeness and mutual admiration that many of us can relate to when we think back on our early years.

Ciaran Hinds also shines as Pops, the wise and gentle patriarch whose devotion to his loving wife and grandchildren is portrayed with a wonderful knowingness that could only be achieved via real life experience.

Technically speaking, Belfast is impressive considering its modest budget and independent feel. Shot in black and white, Branagh makes use of colour in various ways throughout, most notably when the youngsters are watching movies on the big screen or at home on television. The time period is clearly defined by excellent costume design and art direction. Van Morrison’s classic hits help to anchor the geographical and historical locale with expert precision.

This is a film that older generations will appreciate and reminds its audience that the past does not always imply sweeter times, perhaps hinting that progress, albeit slow and drawn out, has been made in terms of the troubles in Northern Ireland. Belfast never preaches from one side or the other and attempts to show a more inclusive commonality and shared history that we can all relate to. It also serves as a love letter to the city and its people, with Branagh acknowledging his own roots and celebrating the majority of peaceful people caught up in a whirlwind of hatred and violence that they do not fully understand, desire or relate to.

Minor criticism can be made in terms of some of the accents, but these small faults do not detract from what is a generally well-rendered and impressive whole. The emotional journey is peppered with humorous moments, which made me laugh out loud; something which is a welcome respite in between tense scenes of peril and threat that must have been terrifying for the innocent people caught up in the violence.

Belfast is a very enjoyable film, perhaps slightly old-fashioned, but then again, that’s the point in a historical drama like this. It lets us look at the past and helps us celebrate the good and identify the bad, hoping that we will continue nurturing that which brings us together and hopefully learn from the mistakes that pull us apart.

And that’s our review of Belfast!

Did you enjoy Belfast? What did you think of our review? Let us know in the comments!