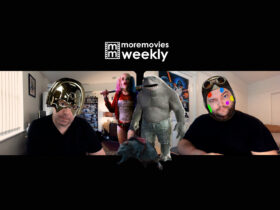 Enter The Ninja (1981) is a martial arts action-adventure film starring Franco Nero, Susan George and Sho Kosugi and directed by Menahem Golan, who, together with his cousin Yoram Globus owned the Cannon Group.

Cannon produced a string of Ninja-themed movies throughout the 1980s, the first of which was Enter the Ninja. Beforehand, seeing ninjas on-screen in Western movies was a relatively uncommon sight. The James Bond film You Only Live Twice (1967), Sam Peckinpah’s The Killer Elite (1975) and the Chuck Norris actioner The Octagon (1980) being a few exceptions.

Lifting its title from the famed Bruce Lee film Enter the Dragon (1973), Enter the Ninja is a story about an American war veteran trained in the ancient art of ninjutsu. This idea would also serve as a template for the later Cannon-produced cult film American Ninja (1985), a movie that took a lot of its inspiration and ideas from Enter the Ninja, repackaging them with the American market firmly in its sights.

It was via the sequel to American Ninja that I first heard the word that would transform my childhood. In 1987, Cannon released the film American Ninja 2: The Confrontation (1987) and this was the first time I had ever heard of a “ninja”, and I quickly became obsessed with the concept of ninjutsu and the mystery surrounding these ancient Japanese assassins.

I must have seen American Ninja 2 when I was about 9 or 10 years old, and at that time, the film was only available to rent from the local video store. Then, one day as I was rifling through the videos for sale in the local Woolworths, I found Enter the Ninja. It was only £5, which was the exact amount of pocket money I had with me, but it was an 18 certificate.

I was just a child then, but decided to take my chances and see if the cashier would notice the age restriction or not. So, I took the tape to the counter, laid my fiver on top of the box and without a blink of an eye, the vendor took my money and sent me on my way, tape in hand.

I couldn’t believe my luck! I dashed home and waited for the appropriate opportunity to load the tape into the VCR and press play on what would become one of my favourite films as a kid.

The story is fairly predictable and typical of this type of film. Franco Nero plays Cole, an American who is trained in Japan, becoming the first westerner to master the art of ninjutsu, much to the chagrin of his jealous Japanese rival, Hasegawa, played by Sho Kosugi.

Kosugi would go on to make two more Ninja films for Cannon, Revenge of the Ninja in 1983 and Ninja 3: The Domination in 1985. These three films would become known as the Ninja trilogy, even though the stories and characters are all unrelated, the common factor being that they were ninja films that starred Kosugi, and that is all.

Enter the Ninja opens with ten minutes of action in which Cole battles several other ninjas in a jungle setting, fighting them with fists, feet, swords, bow and arrows, blow darts and an assortment of other ninja weapons. As a ten-year-old watching this sequence, I was pretty shocked at the bloody violence, which culminates in a beheading. I soon realised why the film carried an 18 certificate.

However, this opening scene is something of a ruse as it is revealed that nobody has actually been killed, even the beheaded old man, and they are all, in fact, part of Cole’s final test to see if he has what it takes to become ninja master.

From Japan, Cole travels to the Philippines to visit his old war buddy Frank who has settled on a plantation with his new wife, Mary Ann. Frank (played by Alex Courtney) and Mary Ann (played by Susan George) are under pressure by a local business tycoon who wants to buy their land. Unbeknownst to them, their farm is sitting on top of a rich oil field, and the evil Charles Venarius (Played by Christopher George) wants to buy them out and take it for himself.

The only problem is, they don’t want to sell. So, Venarius sends his goons to rough up their employees and attempt to frighten them off. When Cole arrives, he wastes no time laying into the villains and protecting Frank and Mary Ann from the henchmen.

This is the set-up, ninja visits friends, friends need help with the local gangsters, ninja gives the gangsters a whipping. It is basically a western in an eastern setting. After Cole dispatches most of the Venarius crew, the bad guys get wise and hire their own ninja to take care of Cole. Who do they end up employing? Hasegawa, of course!

Cole’s old ninja school rival wastes no time wreaking havoc on the plantation, killing Frank and taking Mary Ann hostage. The film then concludes in an epic showdown where Cole must dispatch the remaining Venarius gangsters, Venarius himself and, of course, Hasegawa.

As with all Cannon productions, this film was made on a shoestring budget. The effects are simple and cheesy looking, the dialogue is pretty predictable and clunky, the voices are dubbed, and the entire concept is pretty laughable. But I was ten years old when I fell in love with this film, and to a young martial arts-obsessed lad in provincial England, Enter the Ninja was one of the most exotic and exciting movies I had seen at that age.

Looking back on it now, the film still holds a lot of nostalgic charm for me despite its many downsides. There are scenes of cock-fighting that I didn’t understand as a kid, that I now find abhorrent as an adult, and some of the bawdy dialogue and scenes would undoubtedly blow the minds of the younger generations of today.

Yet, Enter the Ninja does have a lot going for it in terms of this genre. Cock-fighting aside, the exploitation aspects are never too coarse. The final fifteen minutes are reminiscent of something like Commando, where our hero equips himself with an arsenal of weaponry and bravely confronts an entire army of goons in order to save the day.

This film is special to me as it was the first-ever film I bought for myself with my own money. I must have watched it a hundred times growing up and never wasted an opportunity to show it to friends who, like me, would become so inspired that we would don our hoods and scarves, head out into the woods with our sticks as makeshift swords, and train ourselves in the art of movie ninjutsu, passing many a happy hour engulfed in playful fantasy and ninja magic.

Well, that’s it for this review of Enter the Ninja!

Have you seen Enter the Ninja?  Let us know in the comments!