Sinister & Spooky: All 12 Halloween Movies Ranked From Worst to Best

X is set in 1979 and starts with aspiring pornographic actress Maxine Minx embarking on a road trip through Texas with her producer boyfriend, Wayne. Along with fellow actors Bobby-Lynne and Jackson Hole, they are joined by director RJ and his girlfriend, Lorraine. They are off to shoot an adult film for the booming theatrical pornography market rising in America at the time. However, RJ wants this porno to be a more serious cinematic piece, which isn’t really on the mind of any of the stars, whilst his girlfriend Lorraine doesn’t know of the dirty content of the film and is unimpressed with RJ and the group, as their idea of fun goes against her religious beliefs.

The group arrives at the farm of Howard and Pearl, an elderly couple in whose guest house the group intends to shoot their film, titled “The Farmer’s Daughters.” Howard is very antagonistic when they arrive, not remembering he booked the guest house out and not expecting a large group. His wife Pearl is introduced in silhouette through the top window, a nod to Norman’s mother in Psycho (1960).

After Maxine gets away, thanks to the returning Howard disrupting what was happening, Pearl wanders out of the house to see what their visitors are up to. She watches Maxine have sex with Jackson in a scene filmed in the barn and becomes incredibly aroused. She pleads with Howard to have sex with her, but he refuses, claiming his heart is too weak.

Night falls, and the film crew relax in their farmhouse. Lorraine, keen to shed her reputation as a prude and intrigued by the film, asks to participate in the shoot, to the delight of Jackson and Bobby. This is incredibly upsetting for RJ, which does not impress Wayne, but he eventually agrees to shoot a scene between Lorraine and Jackson. Later, however, he becomes so furious over her unfaithfulness that he leaves while the others are asleep.

He gets in the van outside and attempts to leave, only to be greeted by Pearl, standing in the headlights in front of the truck. He at first thinks she is a bit confused and needs help getting back to the house. When he goes to help, however, Pearl attempts to seduce him. When he rebuffs her, she stabs him to death. Brutally. After this violent attack, Lorraine and Wayne notice RJ is missing and go on a search to see if they can find him.

From here, you can imagine what is in store for the rest of the cast and crew…..

The film is a loving tribute to 70s exploitation cinema in its texture and tone. It also pays tribute to famed slashers and horrors of the past. The combi-van with a group of friends in a rural setting is clearly based on The Texas Chain Saw Massacre (1974). The presence of an alligator in the lake points to Hooper’s Eaten Alive (1977). RJ even mentions it being fine to introduce a new character halfway through, ala Psycho (1960).

Combine these uncomfortable truths with the emotional reason Pearl feels the way she does, her reason for committing these acts, and you have a really awkward truth to deal with. In this sense, despite all the blood thrown around the screen, the film is truly very human.

X is a fascinating slasher film with far more depth than its modern contemporaries. It explores deep trauma and frustrated desire whilst being packed with dark humour. A delight to watch, equally entertaining and frightening. Another great one from A24. Highly recommended.

And that’s our review of X!

Did you enjoy X? What did you think of our review? Let us know in the comments! 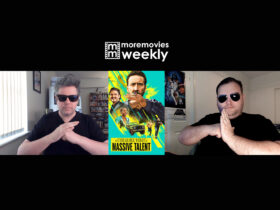 In this episode of the More Movies Weekly podcast, Greg and Dave discuss The Unbearable Weight of Massive Talent (2022), the new action comedy starring Nicolas Cage and Pedro Pascal. They also talk about the rumours surrounding Face/Off 2 (TBC), Bill Murray getting cancelled, James Hong's Walk of Fame Star and more!

April 29, 2022
Load More
We use cookies on our website to give you the most relevant experience by remembering your preferences and repeat visits. By clicking “Accept”, you consent to the use of ALL the cookies.
Do not sell my personal information.
Cookie settingsACCEPT
Manage consent