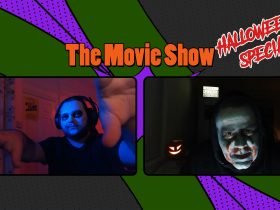 Seth Rogan has had an interesting career that has gone from Superbad to superworse. Since the early 2000’s he has starred in a string of comedy vehicles with some degree of success. Pineapple Express (2008) and The Interview (2014) are two of the more memorable efforts in his filmography, there are countless others that are ultimately more forgettable. It is my guess that his latest film An American Pickle will eventually end up on the forgettable pile.

The story is a completely ridiculous tale about a Jewish immigrant who moves to America when he and his wife are left with nothing after a kossack attack on their village. Arriving in the land of the free, Herschel Greenbaum (Rogan) and his wife Sarah (Sarah Snook) are keen to make a good living in their new home in Brooklyn, New York. Herschel gets a job at a pickle factory as a rat killer, where one day he falls into a giant vat of pickles. The factory is suddenly condemned and shut down immediately, leaving Herschel to stew in the vat for 100 years.

Miraculously the vat gets disturbed and Herschel is resurrected in modern-day Brooklyn, apparently perfectly preserved by the pickling juice. He then enjoys a brief spell as the hot topic of the week, becoming a celebrity due to his extraordinary revival. Herschel soon discovers that his wife is long dead and his only surviving relative is a lonely Brooklynite called Ben Greenbaum (also played by Rogan). The two meet and Ben initially seems pleased to welcome his recently awakened ancestor into his home, introducing him to some of the gimmicks of modern technology, with which Herschel is understandably perplexed and impressed by in equal measure.

The two Greenbaum’s soon discover that their priorities are wildly different when Herschel realises the family burial plot has been left to rack and ruin. He is completely disgusted to find a huge advertising billboard in the middle of all the graves and immediately picks a fight with some nearby road workers, wrongly mistaking them for kossacks. It is at this point that An American Pickle becomes really rotten. From hereon in, the two Greenbaums are at odds, Ben having been besmirged after becoming embroiled in Herschel’s fight with the road workers, resulting in an arrest and a criminal record. This means that no one will be interested in the app he has been developing for five years, and all his hard work has apparently been for naught.

Herschel vows to make a success of himself and earn enough money to restore the burial plot to a respectable condition. He quickly develops a pickle selling endeavour, utilising junk he finds on the streets and creating a buzz on social media thanks to some of his hipster customers who admire his sustainable business model. Ben is jealous of Herschel’s success and does his best to sabotage his great-grandfather’s efforts by exposing him online. The two then become sworn enemies and continue to antoganise oneanother until the final few scenes of the film.

One cannot help but think of all the missed opportunities for some great comedy. This film seems to forget that it has a completly ridiculous premise and is intended to be a light-hearted forray into buffonery. It instead attempts to telegraph certain ideas about the ideological differences between generations, using the internet as a tool to expose outdated attitudes which ultimately serves as a condescending and feeble plot development, and one which ignores any worthwhile character studies.

Rogan has been praised for his portrayal of the two leading characters, and without wishing to be overly cruel, you could say that he does a decent enough job. But this movie is completely lacking in any other supporting roles, which are sorely missed and needed in order to lend a sense of balance. Unfortunately it’s just Rogan all the way, leaving hardly any room at all for the peripheral characters to receive more than a cursory glance. Suffice to say there is no redemption herein, and I was left feeling cheated out of 90 minutes spent watching it. In fact, by the end of the film I had completely lost interest and was just waiting for it to draw to a predictable conclusion.

Those expecting a laugh a minute or something akin to Encino Man (1992) will be sorely disappointed with An American Pickle. Unfortunately, in my humble opinion, it is a total misfire and your time would be better spent re-watching or discovering the aforementioned Bredan Fraser comedy classic than wasting any of your valuable time watching this turkey. One was not amused.

Take a look at some more of our film reviews here and and please join us on Facebook and Twitter.